From the very beginning I was keen on Anja

Hello, my name is Frank, I am 31 years old and I work for a large online mail order company in the warehouse, I am responsible for the high rack. Seven floors packed with goods. On the side, I am a womanizer. If you know what I mean. I just know what the girls want. And that’s what they get from me. Mostly in kind. ;-)

I started here as an apprentice as a forwarding merchant, then worked my way up and now I manage the major part in warehouse IV, 7th high rack with the goods for export. I am responsible for 32 warehouse staff who work in three shifts, including at night. There are also five apprentices, two of whom are women. One of them is only 16 years old and quite fat, the other is almost finished with his training and is 19 years old. The older of the two I noticed right at the beginning, she is a pretty horny piece, if I may say so. All eyes were focused on her when she entered the camp. The one or the other of them would surely have liked to lay a pipe with her.

Anja, that’s her name, has long medium blonde hair and when she smiles she has the sweetest dimples I’ve ever seen. She has dyed some colourful highlights in her hair. Her breasts are not too big, but they are very firm and fit well to her sporty figure. With this butt she certainly does a lot of sports! Whether she has a boyfriend or not, I don’t know, she hasn’t been picked up from work by any man yet. During work we wear uniforms and safety shoes, unfortunately her body doesn’t show to advantage. But at our last Christmas party she wore a dress that made her look like a bomb. Like a bombshell.

Of course I call Anja as often as possible to show or explain something to her. Even though she is already in her third year of apprenticeship, she doesn’t know everything yet and she doesn’t know the one or other trick yet. Most of the time I think that I am alone with her. Whether she has already noticed that, I do not know. In any case, I have already cast an eye on the little one, maybe even two. I’d love to have a go at her. Even at work, in a high rack.

Sex with trainees is of course – as in other companies – strictly prohibited. Especially as her supervisor. But somehow Anja has completely turned my head. No wonder, I think the other colleagues had a similar experience. On Tuesday last week she was assigned to the night shift, together with six colleagues and me. From time to time I also worked at night, although not too often. And if Anja had to work, then all the better.

Of the six colleagues, four were forklift drivers and one was an order picker, the last one was in the high rack together with me. His name was Jochen, he was physically a little restricted and had been working as a warehouse worker for 17 years and has been doing the same thing every day since then. Pretty monotonous, but he probably didn’t have many opportunities. He liked working with me because I was quite relaxed and gave him many breaks. Because of his slight disability, we had to allow him many breaks from work anyway.

Anja was also on the high shelf. It was very hot that evening, the air conditioning didn’t work properly and the four forklifts didn’t exactly help to cool down. It was so warm that Anja folded down the top of her overalls at some point. She only wore a black top, which left her belly free and allowed a look at her flawless skin. Her breasts were a bit bigger than I remembered, but not too big and still well shaped and firm. She didn’t seem to be wearing a bra, her nipples were a bit prominent due to the thin fabric. I struggled not to stare at her all the time, but I could hide my glances. Only secretly I looked at her from time to time with a furtive look.

We were alone on a high shelf

“Are you going to your boyfriend’s house tonight after your shift?” I asked her out. “No, I don’t have one, and I always go straight to bed after the night shift,” she volunteered information about her relationship situation. She smiled at me cheekily and went up one floor in the high rack. “Come here if you can catch me,” she flattened and climbed even higher. “Come here when I get you,” I whispered. “Then what?” it echoed back as she climbed one more floor. “Then I’ll fuck you on a high shelf!” I snorted and at the same moment I was ashamed to have been so direct. “Do it, if you can” came the somewhat surprising answer. And she climbed another shelf higher, turned around for a moment and laughed at me.

When we reached the top of the high rack, she couldn’t escape me. Now I had her! While I was still panting because of the exhausting climb, I pulled her towards me and just kissed her. To my delight, she jumped right in and we flicked around unrestrainedly. A glance down confirmed to me that the campers were taking care of their work and didn’t notice us. I hastily pushed her top up. The buds of her fantastic breasts were already hard and were laughing at me. I kneaded her horny tits with both hands and twisted her nipples, which became even stiffer. “Don’t take so much time and fuck me”, Anja moaned in my ear. Well, I certainly don’t need to be told something like that twice! 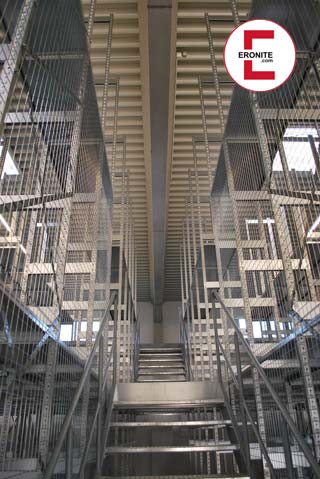 Anja was a gifted cocksucker

But first she kneeled down and opened my pants, then pulled them down to her knees and began to jerk my semi-rigid cock. Quickly it became quite hard. She looked just cute as she kneeled in front of me and looked at me innocently with her big eyes. With her tongue she touched my glans, pushed the tip of her tongue into the little hole.

She was supposed to be my little fuck bitch right here, right now

But in order not to really get into her mouth I pulled my spear out of her and pulled Anja up. Our lips met for an endless kiss. So she could not kiss well either. Anja seemed to be a real dream woman. But anyway, for this moment she was just going to be my little fuck. I quickly turned her around, grabbed her tits hard from behind and kneaded them hard. A moaning escaped her in this moment. With practiced grips I pulled off her pants and pulled down her panties.

With my knee I divided her legs and from behind I pushed my hand between them. First I penetrated her with my thumb, then with the other fingers, with which I massaged her pearl. So I rubbed her clitoris for a while, my hand was already wet from her moisture. The pussy juice ran down her thighs. Now she seemed to be ready for the fuck.

Anja leaned slightly bent forward against the shelf and supported herself. With both hands I spread her buttocks, put my cock on her wet shining fuckhole and with only one push I was inside her. She snorted and moaned as I fucked her so. With all my strength I fucked our apprentice from behind. Her ass looked horny and also the view how my hard butt penetrated this little sow was wonderful. I could see exactly how my fat cock, enclosed by her swollen labia, penetrated her again and again. We fucked in this position for at least fifteen minutes. But I couldn’t keep it up any longer.

The bitch cheered me on to fuck her even harder. No sooner said than done. When I hit Anja on the cheek, her body reared up. She became stiff, but I held her hair tight. She shook herself and climaxed with a huge orgasm. Now I couldn’t hold on any longer either, now it was my turn. My dick started to twitch as she held me tightly around her vaginal muscles. Yes literally milked off.

With several thrusts I came pulsing in her pussy. My pipe shot the sperm into her tight, wet cave and never stopped twitching. In no time she escaped me, kneeled down again and licked the last drops from my plump, purple-ruffled glans. She looked me in the eyes again and smiled, before she put her lips over my cock again and sucked me clean.

What can I say? Since then Anja and I have been a couple. We are in love like two lovebirds and have had sex a few more times at work. But what we like best is to remember our first sex on the high shelf back! 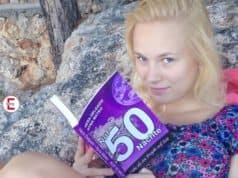