RABBIT SKATER by Orion – velvety soft, but hard as nails

In addition, seven vibration modes are available to customize the frivolous pleasure as desired.

The application of the Rabbit Skater

★ Buy the Rabbit Skaterin the shop

The Rabbit Skater sits perfectly in the vagina once the clitoral stimulation arm is positioned over the clitoris. By adjusting the vibration, clitoris and vagina can be stimulated in parallel by shocks. Since the vibration is adjustable in seven levels, there is a suitable setting for every woman. No matter whether she likes it gently or rather violently. The same applies to the intensity of the shocks. With the Rabbit Skater every woman finds her own rhythm.

” These Girl Use Vibrators.

What should “woman” pay attention to when using it?

The most important details at a glance:

The sex toy is made of high-quality materials that are pleasant to the touch.

More sextoys in the test 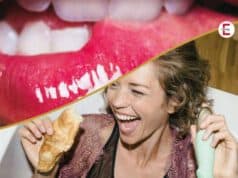 Julia Moreno-10. August 2019
I just wanted my sexual satisfaction and for that my acquaintance Adrian came just in time. Being single, I was tired of having to do it myself all the time. And so I experienced one of the hottest evenings of my life.