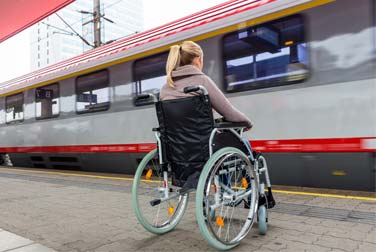 Silke was in a coma for seven months, suffered several rib fractures, and one knee was shattered. But worse – her spinal cord had been injured. From then on, she could no longer move her legs. 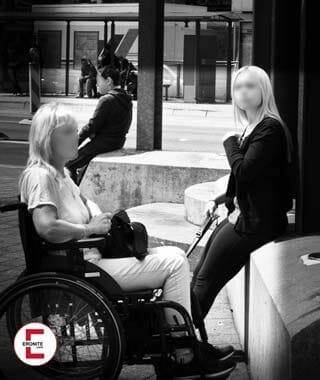 When the trained foreign trade specialist from East Westphalia rolls past the scene of the accident, all the memories of the time after the coma come flooding back. When she learned that she would never be able to walk independently again. The anger at the driver who was not in control of his car. The anger at herself that she still absolutely had to run quickly across the street. Silke has already had two suicide attempts. One two months after the terrible diagnosis was opened to her. She was still in the hospital then. And then the second one five years ago at the day hospital. At the first one, she swallowed an overdose of sleeping pills quite classically, but at the hospital, the nursing staff quickly took notice. In the other suicide attempt, she drove her wheelchair into a lake and tried to drown, but alert passersby pulled her out of the cold water in time.

Eronite Silke, we thank you very much for accepting our invitation for an interview. We were afraid that you might react negatively to such an unusual request. We are glad you are doing so well today.
Silke Yes, no more sleeping pills for lunch today. But maybe I’ll go to the lake later. Don’t worry, just to relax. (She laughs) When your request came, I didn’t hesitate for a second. I would like to encourage other people with disabilities to stand by their sexuality. Just as I do. It should not be an obstacle, and certainly not a taboo. Nevertheless, I often meet with rejection in the scene, which is why, by the way, we are now also moving to the south of France, my husband’s homeland. Nobody knows me there and people are more open.

Eronite That’s news! When does it start?
Silke Everything is already prepared, the moving company comes in three weeks and loads all our belongings. We are moving to Provence. My husband Alexandre comes from a hamlet near Aix-en-Provence. I have never been there, but have looked at all the videos and photos I could find. A beautiful landscape. I assume that I will be able to cope there even as a “wheelchair user” and that I will be appreciated.

Eronite Silke, your dramatic accident happened over ten years ago. Have you gotten used to the wheelchair, or does it continue to be a foreign object to you?
Silke I take it for what it is: a tool. It supports me to get from A to B and it replaces my legs. I have a neutral relationship with my wheelchair.

Eronite BDSM with disability – how should we imagine it? Are you the slave who can’t run away and submissively carries out all her master’s orders?
Silke That’s pretty much going in the right direction. But we have agreements, of course. And a stop word when Alexandre goes over the top. Has only happened twice. But I didn’t have to be afraid, just ask for a stop. This is done verbally, with a safeword. Or by tapping, tapping in German. But to answer your question more precisely: With a Breathplay – i.e. with breath control – he already has to be a bit careful with me and can’t go full speed. We both absolutely love letting him control my breathing. This has a lot to do with trust and dedication.

Eronite We are also interested in the details. A question in between: Does everything happen exclusively between you and your husband? Are other people occasionally involved?
Silke you have hit the nail on the head. I can well imagine being the servant of two or more masters as well. There is still a barrier with Alexandre. He, in turn, would like to have more than one slave. Which I understand, but don’t necessarily approve of. We are still discussing this point, but I already know who will be the winner. Alexandre knows people in his home country who also practice BDSM despite disability. Perhaps this will result in new constellations. I try to be open-minded as much as I can.

Eronite Great how open you are. Surely there are also difficulties in SM with a disabled woman, right?
Silke Sure, I have no strength in my legs, don’t even feel them. If I want to suffer torments pleasurably, they must concern my body and my arms. I usually protect my head with a robust full-face mask. But I won’t tell you what it looks like or what I represent with it.

Eronite That was already a deep and intimate insight. For us, it’s all very informative. And we hope others will feel called to share their experiences with BDSM despite disability. If you like, tell us something about bondage games. Are they part of your program, and how do you design them?
Silke It sounds crude, but it’s not: Alexandre likes to hang me up in a love swing, so horizontal. Then I feel like I’m floating. However, the ropes, leather straps or thin chains he uses hurt. They dig into my skin with every vibration during bondage. I’m going out of my mind, really…

Eronite The question is indiscreet, but maybe you might answer: How does your partner behave in such a situation?
Silke He is insanely excited. I have to satisfy him with my mouth sometimes. Or he holds out a foot to me first and then his penis. Very different, Alexandre always surprises me. Sometimes we just engage in what we call “mini-bondage.” Then my husband ties my wrists together and gives me little pinpricks on my chest or stomach.

Eronite You must have a very fine sensibility?
Silke I think so. Since I’ve been in a wheelchair, I’ve become much more sensitive about skin contact. And Alexandre has really gifted hands. They can be tender and hard, and I’m totally into that.

Tips for SM with a disabled woman

Read also: Lustful breath control: gagging until you pass out

Eronite And what is the best way to overcome the shyness of having sex with a disabled woman?
Silke You must like each other, find each other erotic, turn you on again and again. With words, with gestures. Then at some point you forget about the handicap, at least temporarily. And once you’ve experienced the combination of S&M with a handicap and a few intense orgasms together, you’ll be unbelievably united. Men may not dare to hit on a disabled woman. Or they have things in mind with her that they themselves find borderline. I don’t really know. With Alexandre and me, it was love at first sight – from both sides.

Do you have something to report as well?

* Name changed by the editor

Interesting News
For people in the advertising industry who come up with slogans for perfumes and aftershaves, the new knowledge is a highlight. Because now they can announce that they have always been right. That sexual arousal can be measured in the air we breathe has now been discovered by a new scientific study.