The so-called speedsters provide some variety at soccer matches every now and then. They run naked across the soccer field during the game, which of course causes some irritation among players and audience. For a few seconds the match usually rests and the naked guy gets all the attention.

Basically it’s about a bottle of Almdudler

Almdudler is an Austrian herbal lemonade that enjoys something of a cult status in the Alpine Republic. Hardly anyone who does not know them there. In the clip, a man runs naked across the soccer field and mixes up the game that is taking place. In his hand, of course, he holds a bottle of Almdudler. Only a few seconds later the stark naked Little Caprice appears. Slowly it becomes clear that the guy basically wants nothing more than to hand the bottle to the lady.

The result was an elaborately produced clip with the fans of the soda, which caused many a smile, especially online. Little Caprice was of course the perfect choice to dash naked across the soccer field – not least because she now has close ties to Austria. 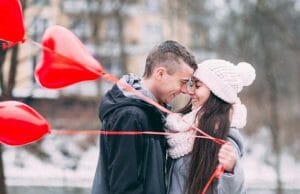 Dating psychology
The first impression counts. This adage applies not only to the first face-to-face meeting, but also to online dating. We give the best four tips for creating a dating profile so you can get off to a successful start!