Crazy most beautiful pussy in the world and a Miss Vagina

The prettiest pussy in the world was won by Englishwoman Nell (27 years old, from London), her smooth shaved pussy convinced the more than 130,000 readers who were able to vote for their favourite from the numerous photos. Thousands of women from all over the world took part in the vote and uploaded the sharpest and craziest pictures. 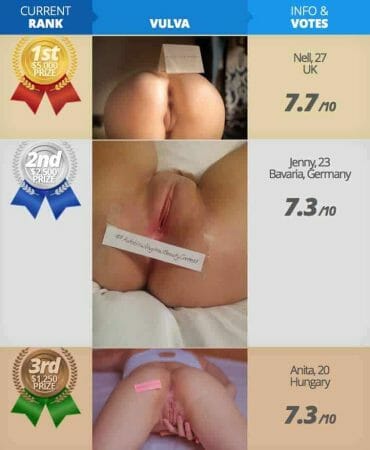 The prize money was impressive: 5,000 US dollars and a luxury holiday in Hollywood’s dream factory Los Angeles was won by the winner. On the places two and three, US$ 2,500 and US$ 1,250 respectively were still waiting for the world’s most delicious pussies. The most beautiful vagina in the world stood for election.

You had to upload a hot photo of her naked vagina with first name [of the participant, not the vagina ;-)], age and place of residence. Many women followed this call and did not want to miss the chance to win and cash the big check or get the plane ticket to L.A. in California. And who knows, maybe they show her pussy there at Malibu Beach to the fancy lifeguards?

Everything was there, every shape and size: the most beautiful pussy in the world was voted Miss Vagina

10 points were to be awarded. The British rider Nell won with 7.7 points ahead of 23-year-old Jenny from Bavaria and Anita (20) from Hungary. Nell may now officially call herself Miss vagina. She has the most beautiful pussy in the world.

Brian Sloan, who was responsible for the Miss Vagina contest, is said to have brought the Miss Vagina contest into the world not just for fun. In fact he wants to develop a sex toy. Of course the model should be the most beautiful pussy in the world. This is to be achieved with the aid of a 3-D scanner. Supposedly the toy is even supposed to go into serial production.

Is there really one?

It also remains questionable whether competition really reflects the tastes of the general public. If one looks at the three main winners, one gets the impression that a pussy with relatively small inner lips of Venus was specifically sought. We know from the comments of our readers that not everyone prefers this. Moreover, the winners all seem to be fair-skinned.

Waitress uses hotdog as tampon and serves it

Since Miss Vagina was chosen by readers, no fixed criteria can be assumed. The voting result must be accepted without discussion. But as much as we are happy about the most beautiful pussy in the world, we would have been even more happy about a little more variety. Who knows maybe in the future there will be a miss-vagina-option with categories.

Officially the British Nel has the most beautiful pussy in the world. But we are sure that many men and women have their very own favourite. How about the wife’s pussy, for example? The Miss Vagina contest was certainly entertaining for everyone involved. Which exhibitionistically inclined woman would not like to win 5.000 EUR with a photo. And the judging readers certainly had fun, too.

How about an election for Mr. Penis?

There seems to have been no election for Mr. Penis yet. Of course, beauty contests are especially common for women. But what’s to be said against it. Beautiful penis would certainly meet with interest as well. And why not let a 3D scanner recreate the perfect penis?

Julia Moreno - 19. November 2018
I had not expected this surprise at all. But I could never have imagined becoming my roommate's sex slave. But then I had a pretty tingly experience with two young men and the older Martin.

Pleasure in pain: what do masochists feel? 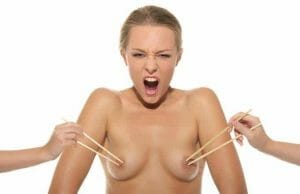 Interesting News
Pain is somehow perceived negatively by all people. Many simply cannot understand that in some places there are people who can enjoy the pleasure of pain and see it as something beautiful. But why is that actually the case?