The case of the naked blonde model

In 2016, the case of model and nude starlet Gina-Lisa Lohfink caused quite a stir throughout Germany. The voluptuously endowed blonde sued for alleged rape, but ultimately failed. Nonetheless, her lawsuit led to the reform of the criminal sex code. Some people even made the woman a fighter for women’s rights. Before we take a closer look at the case, here is some background information.

Who is said Gina Lisa Lohfink?

Most people are probably familiar with her through one or another appearance on trash TV, or, to put it more delicately, reality TV. The (mostly) blonde beauty was born in 1986 in Seligenstadt, Hesse. There are no exciting facts to report about her childhood and youth. After graduating from school, she trained as a medical assistant Shortly after, she participated in several regional beauty contests and won prizes.

Gina-Lisa won the titles “Miss Frankfurt 2005” and “Miss Darmstadt 2006”. Outside her home country, Lohfink became known in 2008 through her participation in the show “Germany’s Next Topmodel”. Although she only took 12th place, her relaxed manner was well received by the spectators. At this time, a development began that ultimately contributed to the reform of the sexual criminal law. After appearing on Heidi Klum, Gina-Lisa Lohfink appeared in several shows and tried her hand as an influencer, singer, advertising model and travel blogger, among other things.

The biggest impact of the model comes from her attractive appearance. She understood and understands perfectly how to market herself. After several plastic surgeries and changes of partners, the It-girl is still active on TV, YouTube and Instagram.

What is the starlet’s case about and why was the sexual offence law reformed?

The case, which ended up in court in 2016, dates back to events in 2012. At that time, Gina-Lisa Lohfink was already known through various appearances on television and in commercials. That’s why the then 25-year-old was booked for a performance at a Berlin soccer charity tournament on June 1.

After the performance, she met one of the soccer players in a club. Gina-Lisa Lohfink and the athlete spent the night together amicably. Most likely, sex occurred in the process. Who can blame the man, the starlet is a very attractive woman, a real blonde sex bomb. The case that (among others) led to the reform of the sexual offense law occurred a day later.

A few days later, Gina-Lisa Lohfink’s lawyer filed a complaint with the relevant public prosecutor’s office. Initially, the complaint was only about the violation of Gina-Lisa Lohfink’s personal rights. She testified that the recordings were made without her consent and distributed against her will. This seems to be true, because allegedly intimate photos of a well-known tabloid were offered for sale. Scenes of the wild night were also posted online and downloaded more than 10 million times. Understandably, the lawyer put pressure on the authorities to delete the recordings. However, this failed.

Two days later, on June 13, 2016, events took their course that led to the reform of the Sexual Offenses Act. Lohfink’s lawyer spoke again at the public prosecutor’s office and now filed a complaint for rape against the two men with whom Gina-Lisa Lohfink spent the night.

According to the model’s statement, she would have been rendered will-less with knockout drops. The sex was without her consent. The case ended up with the Sex Crimes Unit, which ordered a search of the defendants’ homes and the seizure of their cell phones.

The result of the investigation by the prosecutor’s office

The sexual offense law was reformed because of the content of a video clip that was on the seized cell phones. In total, 11 files were involved, but the prosecutor’s office did not investigate all of them. On the videos examined, Gina-Lisa Lohfink appeared lively and cooperative. She sang, danced and kissed the defendants, even during sex. Apparently, there were only objections to filming. The prosecution could not find any evidence of rape or the influence of knockout drops.

In the trial, the model raised the accusation of rape. Confronted with the footage, however, she remained silent and at times even burst into tears. The end of the story: A penalty order was issued against Lohfink for false suspicion. The two men reported her for slander and insult and the judge sentenced Gina-Lisa Lohfink to a fine of 20,000 euros. The woman appealed against this decision, but was unsuccessful. Her credibility and reputation suffered as a result of the trial, especially since a number of juicy details were brought up during the proceedings.

The 12th video (which prosecutors never investigated), among other efforts, led to the reform of the criminal sex code. In the short clip it is quite clear that the Lohfink says no to sex. In public, the It-girl, who previously liked to be very revealing, was turned into a feminist. Based on her case, many influential people called for reform of the sexual offense law.

The case of Gina-Lisa Lohfinkwas only one of several occasions that led to the reform of the sexual criminal law. The events on New Year’s Eve in Cologne in 2015/16 also played a major role.

How was the sexual offence law reformed?

The reform of the sexual criminal law concerned § 177 StGB, para. 1. The paragraph deals with sexual assault, coercion and rape. Before the Sexual Offenses Act was reformed, this paragraph was a weak point in the Sexual Offenses Act. It classified a sexual act as a criminal offense only if the perpetrator used force or coercion against the victim or threatened to do so. The will of the victim did not matter. This is exactly why the perpetrators got away with it in the case of Gina-Lisa Lohfink. Although she clearly said no several times in the video, it was not rape. Surely the reputation of the model also played a role. She was and is known to be permissive.

The legislature recognized that sexual criminal law needed to be reformed and the weak link in the form of Section 177 of the Criminal Code removed. In the judiciary, this change was given the name the “No means No” reform. The Sexual Offenses Act has been reformed so that from the entry into force of the amendment in December 2016, any non-consensual sexual contact is punishable. This means that if the victim expresses through words like no or defensive gestures that she does not agree to sex, it is rape. The rejection of the sexual act must be recognizable by an objective third party. In the case of Gina-Lisa Lohfink, this ominous third party could have been the camera. In practice, a witness may also be considered. By the way, the reformed § 177 StGB also applies to sex workers and all employees in the erotic industry.

Has the “No means No” reform made a difference?

Many legal experts believe that the sexual offence law has been reformed, but that the aim of the reform has been missed. That was to better protect victims of sex crimes. They should have an easier time reporting the perpetrator(s) and bringing them to justice. This goal was clearly missed. Although police statistics for 2016 to 2019 showed an increase in cases of violations of Section 177 of the Criminal Code, the number of cases that were dropped or ended in acquittal increased.

The number of unreported cases in this area is extremely high. Since there is no evidence, experts can only provide estimates. They suspect that, on average, only one in 100 acts is discovered. If charges are filed, proceedings are opened in only 10 to 20 percent of cases. The case of Gina-Lisa Lohfink is a good example of this.

Why is the effect of the reform fizzling out?

The causes are myths and prejudices as well as the sensationalism of some media, which are not interested in objective reporting. For example, the myth of the vengeful woman persists to this day. Perpetrators deny rape and instead talk about consensual sex. They say the victim only made up the accusations to get revenge or blackmail the accused. Another myth is that the accused did not realize that his victim did not want sex. Unfortunately, many get away with it in court.

Another reason is the poor way the media reports. Sex sells. The reporters know this very well. When a trial is underway involving sex, rape, and intimate details, they flock. This is even more true when it involves celebrities as attractive as Gina-Lisa Lohfink. Therefore, many victims refrain from filing a complaint in the first place.

She almost certainly still has to think often about the fact that her 2012 case led to the reform of the criminal sex code. In retrospect, she certainly regrets that the matter became public. She is now over her defeat in the court case and is back to her usual life of performing at shows and on YouTube. Its reputation and standing, which were severely damaged at the time, have been restored. At that time, the judge sentenced the two defendants only because of the video recordings. The footballer paid the fine.

The other defendant disappeared without a trace. He was in court again in November 2017. Again, it was about a rape. This time, however, the judge found the unemployed man from Berlin-Kreuzberg guilty.

He ordered a whore to his apartment and had sex with her. The woman suddenly noticed that he had taken off the condom. When she confronted him, he just kept going. He gave the impression of being on drugs. When the woman wanted to leave, he would have prevented her from doing so. The prostitute reported the man for rape and coercion. In court, however, she retracted her statement. The defendant was convicted anyway. Because he hit the woman on the back of the head and was in possession of drugs, he received a fine of 500 euros. He was then taken to Berlin-Moabit Prison, where he served the remainder of a sentence totaling 7 years.

Many are ambivalent about the case of Gina-Lisa Lohfink, which led to the reform of criminal sexual law. On the one hand, the “No means No” reform was long overdue; on the other hand, it harmed many victims of rape because they could not credibly convey their testimony at trial. It fed the myth of the vengeful woman and damaged her reputation. However, her strong character helped her overcome this issue and continue on her path. 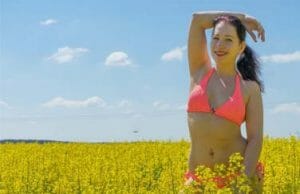