Trans* – what is it actually and how do they differ?

Not only since the possibility to register the gender “diverse” in the birth register, the term “intersexual” is haunting many media and minds. However, those who are not affected themselves do not know exactly what is behind it and may use terms like “transsexual” or even “transvestite” simultaneously.

However, there are sometimes major differences that are not easy for laypersons to understand. Because on the other hand, there are also many similarities and the boundaries are often fluid. To avoid confusion in the future, the following overview should help.

An “intersexual” – “inter” means “between” – is a person who has both female and male sexual characteristics. Intersexuality is therefore a disorder of gender development, which can be based on many different causes. In this context also terms like “hermaphroditism” or “hermaphrodite” are used, although these clinical pictures represent, strictly speaking, only a small part of the intersexual variations.

In general, any deviation from the appearance of a man or a woman, as well as any genetic anomaly affecting sex development, can be called intersexuality. This already includes hormonal abnormalities that trigger, for example, enlarged breasts in men or strong hair growth in women. Typically, however, people are called intersexual if their sex organs are ambiguous, for example, if the clitoris is greatly enlarged. However, it can also happen that a person has both ovaries and testicles. The cause is usually a defective distribution of the chromosomes or a lack of development of the sex glands. Some intersexuals are not able to have or father children because of this.

It is problematic here that intersexuals are often operated on after birth in order to be able to assign them clearly to one sex. However, this can cause severe mental health problems in teenage and adulthood.

In contrast, transsexuals do not have a physically conditioned, ambiguous gender affiliation. However, the affected person feels as if they are living in the wrong body. For this reason, she wants to have gender reassignment surgery. This means that transsexuals may want to undergo hormone therapy and surgery to transform from male to female or vice versa. For example, men can have their penis removed, a vagina shaped and breast implants inserted.

Often the distinction between “transsexuals” and “transgender” is particularly difficult. This is due to the fact that the concept of transgender is often seen as very abstract by those who are not affected. In addition, the term can be seen as a generic term for people who identify strongly with the opposite sex. This is also the case with transsexuals.

So both groups kind of feel like they’re in the wrong body. Unlike transsexuals, however, transgender men and women usually do not want to undergo a reoperation. They are more likely to reject the concept of socially constructed gender roles. Transgender men thus usually want to remain men. But you also want to be able to show your feminine side or completely oppose being assigned to any gender. To do this, you can, for example, wear women’s clothes, grow your hair long, adopt feminine gestures, or work in jobs that society usually considers particularly feminine. You can also adopt a woman’s name or be addressed in a gender-neutral way.

The transgender term thus stands for all those who transcend gender-specific boundaries and do not allow themselves to be forced into a particular, for example socially or religiously shaped, gender image.

A welcome guest on many television shows is Olivia Jones. She stands out not only for her sassy mouth, but especially for her flashy makeup, high tower hairstyles, dazzling dresses and daring high heels. Biologically, however, Ms. Jones is a man. However, like the many other transvestites – or trannies for short – in Germany and all over the world, he loves to dress in women’s clothes and thus live out his feminine side. Conversely, there are also female trannies who like to dress up as men.

With trannies there is no physical disorder and they do not want to have an operation. However, they fall under the group of “transgenders” because they too do not want to identify completely with their actual gender or break out of the usual role stereotypes. However, many transvestites do not feel permanently in the wrong body and for some, wearing the opposite-sex clothing is more of an art and pleasure.

In any case, in the case of a transvestite, the aspect of wearing women’s or men’s clothing must be added, so that transsexuals or people with a gender that cannot be clearly assigned should not be called “tranny”; this could even be perceived as an insult.

Ladyboys or shemales are biological males who identify with the female gender and have often already adopted typically feminine behaviors. So they put on a lot of make-up and wear women’s clothes, their movements are also softer and their voices are bright.

Many shemales also take female hormones and have undergone gender reassignment surgery, though most have not had their penises removed. However, some ladyboys aspire to that as well.

Ladymen are perfect quick-change artists and often difficult to distinguish from real women at first glance. Depending on how far their desire to completely transform into a woman goes, they also belong to the group of transsexuals. Since they also wear women’s clothing, they are strictly speaking also transvestites.

Intersexual refers to biological abnormalities. All the terminology around the prefix trans* is more likely to be psychological deviations from the social norm, so that the person concerned feels that they are in the wrong body. The ladymen described above also belong to this group. Ultimately, the different terms are closely related and show that many other types of play exist beyond the typically male or female role models.

Faizel Ahman - 22. January 2023
Susi was desperate. Her dream of an academic career seemed to end before it even began. She had already screwed up several exams. If she failed again, she was threatened with forced expulsion. However, the club of populists prevented this fate.

Absolute HAMMER for webmaster at CashDorado/FunDorado 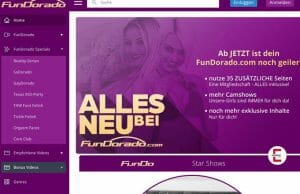