The charm of the wicked

Even though I wasn’t into SM in the beginning, I always had a preference for the corresponding clothes. Especially leather and latex had done it to me. I love this feeling on my skin and feel incredibly sexy myself when I have it on. In addition, in totally like to flirt with accessories from the SM scene. I usually wear a collar with a chain and there are handcuffs on my belt. My style of dress had often led to misunderstandings in the past.

My current boyfriend was not the first SMler who had false hopes because of my outfit. It had taken some convincing to talk him out of his fantasies with me. Nevertheless, he stayed with me. After all, if I may say so, I’m a really good catch. I am young, athletic, good-looking and go off in bed like a grenade. Whereby I always liked to be a little dirty during sex.

That night I became a sex slave

To the big tits slave

His pitch tolerated absolutely no contradiction

Suddenly, something happened that I never thought would happen to me. I was already getting wet. Completely without prior physical contact and only due to the fact that I obeyed an order. His order. Suddenly the sex slave thing didn’t sound so far-fetched in my head.

I pushed the lowered pants aside with my foot and enjoyed his muster. I was glad that I had put on the leather thong this morning, so he had something to look at right away. His eyes crept over my legs and the horniness in his eyes grew. Still in that calm, but not tolerating contradiction tone, he sent me to the bedroom.

Again something happened between my legs. It just shot out of me. He hadn’t even touched me yet and my entire groin was trembling with horniness. Could a single word trigger such feelings? Sex slave. That already sounded cool. His sex slave sounded even better. I had discovered my submissive tendency and loved it from the first moment.

To the big tits slave

I had passed my baptism of fire as his sub

Despite my actually submissive role. With the movements of my tongue and fingers I determined the pace. In this way, I wanted to make sure that we came at the same time. Okay, I didn’t quite manage it, but it was only a difference in time of maybe thirty seconds. Maybe I can already beat my best time next time.

Free book: Only 50 nights - Love as a project

This is why so many men are into black tits 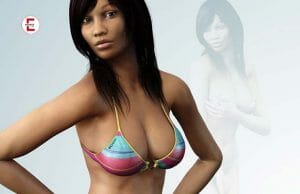