In the helicopter position to the sex heaven

At some point, it can hit all of us. Dissatisfaction, monotony and boredom determine our lives. It is with unease that we go to work in the morning. Every day the same work processes, the same faces, the familiar monotonous environment, arouse our unwillingness. Like a red thread, this rut also runs through our sex life. How much more interesting is a flight in a helicopter.

Everything revolves around sex

Our brain is constantly flooded with new stimuli. As if by a swarm of bees, the nerve cells in our head are blocked. The hunger and greed for new impressions and experiences become almost painful. Flooded by the daily monotony of the media, we look for new challenges. Whether we live in a committed relationship or prefer sex with changing partners, we are also threatened by yawning boredom in our sex life. Who wants to eat schnitzel every day? Flower sex eventually loses its appeal.

Discussions among acquaintances, at work, and even with your partner often do not produce the desired results. Desperately, they look for ways to bring new momentum into the love relationship that has fallen asleep. None of the sex partners is really to blame, there is simply a lack of sparkling ideas. With a little luck and your own effort, exciting possibilities often suddenly appear to make your well-worn sex life more colorful. Even a glance at the Internet, a trip, a joint sightseeing flight in a helicopter or a good tip from friends can have an inspiring effect. There needs to be more pizzazz in the bedroom.

Really good sex is not really satisfying in the missionary position in the long run. In the desperate search for a breath of fresh air in the bedroom comes the thought of position change. When exploring exciting positions, the helicopter position is also a good choice. However, it has little to do with sex in a helicopter or the Mile High Club.

On the way to the heights

If you now ask yourself incredulously, what does a helicopter have to do with sex, you should take a closer look at the helicopter position. This kind of sex is different from the usual standard number in many ways. Nothing ventured, nothing gained is also the motto for helicopter sex.

Read also:
– Knew? That’s why stewardesses are so sexy
– The stewardess banged on the plane to Bangkok
– How to make sex above the clouds even more fun
– Three young stewardesses – together not 75 yearsold

Even the name shows a connection with the spinning rotor blades from a helicopter. However, the saying: no pain, no gain applies here as well. The pleasure of the helicopter position requires some strength and stamina from both sexual partners. A helicopter does not get into the air by itself. In order to reach the heights of sexual pleasure, rotary movements must be used like a helicopter.

Through rotation to the ultimate sex

The ideally strong man lies on his back with a strongly erect member. As in equestrian sex, the woman sits on him and takes his best piece deep inside her. With her legs spread wide, the woman leans back. The flight in the helicopter has begun. The man begins demanding to turn the woman on his penis. With his strong arms, the man supports the rotational movements of the woman on the flight of fancy. 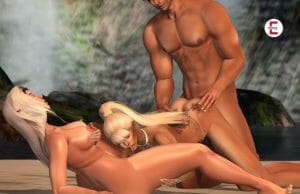