Katixxx and a few interesting questions

We are happy to have had the saucy gal in an exclusive interview with Eronite and she answered our questions on a few topics.

The exclusive interview with the Rhineland girl

Eronite Imagine you’re on set, everything’s ready, the lights are on, the camera’s rolling, and out of the production manager’s mouth comes a “And – please!” What’s going through your mind at this moment? Are you thinking about anything in particular or are you fully focused on your shooting partner(s)? Are there any scenes that you love shooting the most and what are they and why are they some of your favorites?
Katixxx It definitely depends on the situation. If everything fits, I am definitely fixated on the actor or the situation. In the beginning, however, I might still be a bit unsure and ask myself if I’m doing everything right and how I look in front of the camera with which movement. I can’t think of a complete scene right now that I want to shoot. Generally I like the role of the little horny bitch who has to satisfy the man or woman. People are also allowed to grab my hair or hold me by the wrists. Something that tells me that you know what you do and want and that you want me, I can just let go, just do what you want.

“With just bedtime stories, I feel kissing is unnecessary”.

Eronite Every person needs a rock, a support. Especially in less good times it is important to have people around you who are good for you and whom you can rely on. What did your family say when they found out about your job? Were they horrified, did they perhaps even break off contact with you, or were they completely at ease with their daughter’s new situation?
Katixxx I think I am old enough to decide what to do with my body without my parents.

Eronite There are good lovers and not so good. Surely every woman has made the acquaintance of every type of man. One is better, the other worse in bed. But when exactly is a man good at sex for you and what do you think most guys do plain wrong in bed?
Katixxx Wrong in bed sounds negative though. Everyone is just different. Someone with submissive preferences is not wrong, but does not fit me, because I need a suitable counterpart.

Eronite “Nothing comes from nothing” is an old – and true – saying. Many shooting days are long, starting early in the morning and going well into the night. Then there is the day-to-day paperwork and organisation, the classic back office. There has to be time for the Livcam shows too, not to mention that everyone should also devote time to their social lives, family and friends. How do you balance it all and how many hours a day do you spend in front of the cam chatting with your fans?
Katixxx I still have a normal job in the morning. Therefore, I can only chat and shoot in the evenings and weekends.

Eronite Sure there aren’t always golden times when everything goes exactly the way you want it to. Whether it’s rude users, annoying customers or just an unstable internet line, there are many things that can disrupt your normal workflow. If you could change one thing about your job, what would it be and why would you want to change it?
Katixxx More time to film and chat. To be able to implement the whole perhaps nevertheless full-time.

Eronite You probably didn’t become a camgirl straight out of school or high school, or originally planned to do so. Many start an apprenticeship, some complete it or start studying. Some Livecamgirls or amateur girls do the job also only once part-time and change later completely. Others do this work just for the fun of it and are only online a few evenings a week. What would you be doing for a living today if you hadn’t chosen webcam sex?
Katixxx I am a trained beautician. If I had always been able to choose everything in life, I would probably be a biologist, specializing in either genetics or virology.
I would shoot videos then but still!

Eronite What were your first steps? How did you come to webcam sex? Did you have a mentor, so someone showed you the best way to break into the adult industry and make money? Or are you even under contract with an agency that supports you in all areas such as marketing, public relations, technology et cetera?
Katixxx An agency does not exist yet. However, I was very well advised by Detlef when applying to Eronite.

Eronite Making new friends isn’t always easy in this job. There are many prejudices and especially men sometimes think that as a camgirl or amateur you are fair game anyway. Other acquaintances, on the other hand, first develop in the industry, with female colleagues or other representatives of the industry. Do you have friends in your private life who are also active in front of the cam? Would you recommend the work to others or rather advise against it?
Katixxx I don’t know anyone who does that either. Everyone must decide for themselves what he/she does with his/her body. This is too personal for me to advise anyone.

Eronite Many men have their favorites among the camgirls and visit them regularly. Do you prefer to have new users every day or are you happy when you see the same person more often in the chat? Do you have regular users who visit you regularly and do you perhaps even receive gifts or other attentions from them?
Katixxx I’m happy about new users as well as when someone reports more often.

“I used to think vaginal orgasms were more of a rumor”.

Eronite With time, every livecam girl also gets a certain popularity. Has any user ever recognized you on the street? How do you react in such situations? Are you happy, do you offer, if you have time, a little chat or even a coffee or are such encounters rather creepy or rather unpleasant for you?
Katixxx Probably depends on whether the chemistry is right.

Eronite Always the same man as a shooting partner becomes boring for the viewers at some point, they want variety. There it offers itself to turn with others this also in such a way to offer. Do you do user meetings? How did you find it? Do your fans have to pay for such a meeting and are they always filmed on such dates?
Katixxx When it comes to changing partners, I am more flexible towards women because they are more often more attractive, which is less common with men. So far I only make videos.
But I am not saying that meetings are out of the question. I would have to decide that on the fly.

Eronite The hunt for the next sexual climax defines life for many. Whether as an amateur in front of the cam, privately with your own partner during domestic sex or as a user at home in front of the screen. Much boils down to experiencing it as intensely as possible. How would you describe the feeling of an orgasm?
Katixxx Pleasant.

Eronite The days when women had to suppress or put their own lust on the back burner are thankfully long gone. The modern woman of today lives out her sexuality. This includes masturbation. What is your favorite sex toy, do you only use it alone or with a partner as well? How is it different from having sex with a man and what do you like most about your favorite sex toy?
Katixxx vibration and shower jet. The shower jet is very great on my clit and is the only thing I have found that is sometimes able to stimulate my G-spot. My only vaginal orgasm was with the shower head. Before, I thought vaginal orgasms were a rumor. So it’s still quite possible to deflower me in that respect, provided someone manages to top the shower stream.
But I must confess, so far this has never worked on a penis, no matter how many times it was tried. So there is no shame if it does not work. ;-)

Eronite In the adult industry, the percentage of bisexual women is much higher than in the rest of the population. I’m sure this has something to do with the fact that amateur women in the porn scene are much more open about sexuality than the average woman who has nothing to do with the industry. What’s your experience with same-sex sex so far? Why don’t you compare it to sex with a male partner? What are the differences, but also the similarities?
Katixxx women unfortunately often seem to be more reserved and wait for me to act. That unsettles me and is not my thing.

Eronite Over the years, I’m sure you’ve experienced a lot during sex. Far more than most people do in a lifetime. But I’m sure you haven’t tried everything yet either. What sexual experience are you still dreaming about that is missing from your “collection” so far? Is this just a fantasy or do you really want to make this a reality? After all, some fantasies can be quite nice in theory, but in practice they are not feasible or even illegal! But no matter how freaky or unrealistic, what’s your secret sex fantasy?
Katixxx The users should best ask me that themselves! 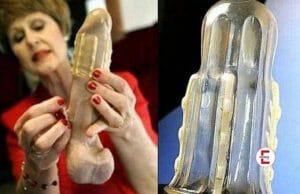 Interesting News
New inventions rarely concern the safety of women. With the user-friendly condom Rapex, this is about to change. It is undisputed that it provides for the immediate "punishment" of a rapist through the pain.