He made me an immoral offer

But sex with a professor? Would never have occurred to me until “he” walked into the lecture hall! A young professor who must have been new to the university. I wasn’t really interested in his lecture, because my mind was somewhere else. When the lecture was finally over, I had to approach him and asked about certain topics I supposedly didn’t understand. His answers failed to quench my thirst for knowledge and he made me an immoral offer. Because he wanted to give me private tutoring.

My chance for some tutored sex! That very afternoon I was to be with him. My preparations were really hectic, skimpy lingerie and an even skimpier skirt already made me vibrate inwardly with lust. Because I knew this tutoring was going to be different! By the time I was at his door and rang the bell, I noticed exactly how slowly my pearl of pleasure was getting excited. Because she was getting wetter and more willing by the second. Two seconds later the door opened and I was not surprised to see the young professor, with only a towel swung around his hips, opening the door for me.

My hands were tied to the bed

” The best stories are written by life.

The large bed with the metal bars caught my eye immediately! I could already see his lust for me in his eyes, as they radiated pure sex drive. He led me to the bed and I lay down, as if in a trance. Then he grabbed some ropes and tied me to the bed. After my hands were tied tightly to the bed, he pulled down my short skirt and panties. Completely exposed, I lay tied up on my professor’s bed – ready for tutoring sex. But I noticed exactly how this bizarre situation excited me.

My professor made me orgasm and I screamed my pleasure out loud. After that, he loosened the bonds and the light marks on my joints would remind me of my captivating tutoring for days to come. Unfortunately, the act itself didn’t happen, but who knows what may come up in the next tutoring session. The tutorial sex with restraints and sex toys has opened my eyes that I have not experienced everything in terms of sex and eroticism! 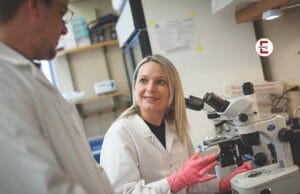 Interesting News
The Norwegian National Institute of Health (FHI) recently published a study showing that the number of people suffering from gonorrhea and chlamydia decreased significantly in 2020. The greatest decline was in gonorrhea.