The main features of the Satisfyer Sexy Secret

How does the Satisfyer Sexy Secret work?

The Satisfyer Sexy Secret is placed so that it rests on the clitoris. The vibrations of the housing are transmitted to the clitoris and cause extremely pleasant sensations that can be so intense that they lead to orgasm. The strength and pattern of the vibrations are best controlled through the free Satisfyer app(for iOS and for Android).

Why are such lay-on vibrators so popular?

What are the advantages of the Satisfyer Sexy Secret?

The battery can be charged at a suitable USB socket using the charging cable included in the scope of delivery. Since the Satisfyer Sexy Secret is waterproof, it is not only easy to clean, but can even be used while showering. The IPX7 protection class means that devices marked accordingly are conditionally waterproof. This means they can be cleaned under running water or used in the shower, for example, but are only waterproof for a short time and are not suitable for diving.

What can you do with the Satisfyer Sexy Secret?

From a technical point of view, the user has to consider that the battery does not last very long on the highest setting. Even if she carries a device with a USB charging port or a powerbank, it is difficult to charge the Satisfyer Sexy Secret on the go. Its shape makes it recognizable at first sight as a sex toy.

If used too frequently and intensively, there is a risk that the user will become too accustomed to the Satisfyer Sexy Secret after a certain period of time. Normal sex is then no longer perceived as so exciting.

What do the users of the sex toy have to pay attention to?

As with most sex toys, hygiene is an important consideration with the Satisfyer Sexy Secret. The toy must be cleaned after each use. For this purpose, it is usually sufficient to rinse the casing under lukewarm water. The use of cleaning agents is not required. Use only your hands for cleaning, never use any hard or scratchy abrasive cleaners! The surface is sensitive.

A little tip at the end

If you are on the road a lot and don’t want to do without the small joy dispenser, you would be well advised to purchase a powerbank with a sufficiently large capacity as an accessory. If the battery runs out, it can be recharged quickly and conveniently. By the way, the powerbank is also a practical accessory for smartphone and tablet. 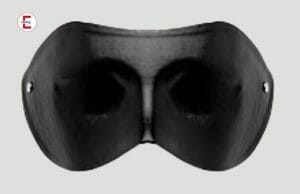 Sextoys im Praxistest
If you're looking for products that will make your sex life even more exciting, check out the Blackout Eyemask from Ouch! The eye mask promises exciting experiences for couples that do not have to take place only in bed. What details stand for them, explains the article.