Since this is therefore a natural cycle, there is no need to fear actual oversaturation. And now let’s be honest: Who can get enough of new, pretty girls? Exactly. There can be many and even more German amateurs.

In the past, it more or less required the equipment of a film studio. Fortunately, that has changed these days. In most cases, a standard smartphone is enough to shoot a video including a decent sound. For editing and post-processing there are free programs on the Internet, the use of which is explained on Youtube.

One point that almost all amateurs offer are the so-called user meetings. Here is free sex for the fan with the lady of his dreams. He only has to consent to the recorded film being shown on the Internet. No intermediaries, no agencies, no one who enriches himself without actually having anything to do with the matter.

This way the fan has his fun and the lady may earn money with this video in the future. The concept is simple, works and is fun. This is why user meeting videos are so incredibly popular. The fans know that there is no actor at work, but someone who could be themselves. This knowledge naturally ensures that many people who have so far merely watched want to try it out for themselves. Be it as a user asking for a meeting or as a new webcam girl starting her own career.

Usually, the journalist is then allowed to watch the filming. Again, surprised reactions, how uncomplicated everything would be. Later, there is a “conversation afterward” in which the reporter hopes to find unflattering details. Depending on which magazine he writes for or which station he works for.

Are we becoming a sex nation?

Everywhere you look, there are German amateurs. On the Internet on relevant portals. On television in the report. In advertising. Even in the motion picture. Maybe even in the neighborhood? In your own house? That’s what you might think when you first get into the subject and you’re struck by the sheer number of amateur women.

She tried it: Sex every day for a year!

But is that really the case? Hadn’t there been sexual revolutions before? For example, when the pill came on the market or when the miniskirt became popular. What do you think women would have done back then if they had had the same technical possibilities as we have today? The answer is obvious. It’s quite possible that the girls from the sixties would have done it a lot more colorfully and fantastically than we do today. The only thing is that not so many pieces of evidence in the form of videos exist from that time.

Are you looking for portals where you can earn money?

We would like to recommend you the following amateur sites:

23 Venus: Berlin once again under the spell of eroticism 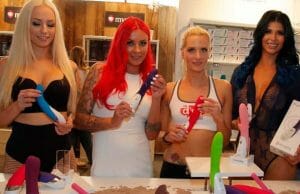