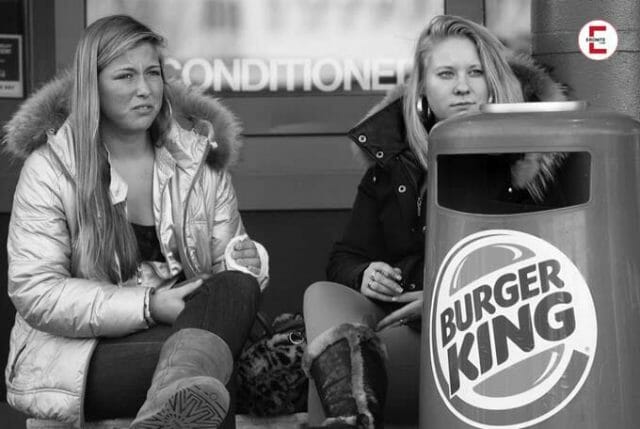 Anyone who would have thought that men only confuse the Flixbus with a jerk-off bus is now being taught better: a 25-year-old man, apparently not long outgrown puberty, apparently took pleasure in exposing himself several times in front of the employees of the Burger King fast food chain.

Burger King as a crime scene for the exhibitionist

The exhibitionist had already attracted attention (negatively) in January when he drove up in his Mitsubishi SUV at the drive-in in Moers (branch in Klever Straße) and ordered a coffee. The young employee, tender 19 years old, was amazed when she wanted to hand him the hot drink in the car and said man there simply masturbated in front of the Burger King woman and did not want to pack his cock at all. The employee immediately called the police.

Perpetrator comes from Kalkar in the district of Kleve

It didn’t take police long to find the perpetrator after the smart Burger King employee took down the license plate number and handed it over to investigators. He was found to be the owner of both the Mitsubishi and the BMW.

Read also: This exhibitionist woman is looking for men to skim

The 25-year-old exhibitionist from near Düsseldorf will now have to undergo a police lineup. In police parlance, the officers here refer to this as an elective light image. If the employees recognize him from one of the three photos submitted in each case, the pervert faces up to one year in prison.

Some time ago, a 24-year-old onanist had committed the same act on a Flixbus in southern Germany, apparently mistaking it for a jerk-off bus[Eronite reported]. Interesting News
The legendary Sankt Pauli Museum has had - and continues to go through - a checkered history. After the exhibition had to leave its traditional place next to the Davidwache in 2019, the museum's exhibits will be displayed in changing locations.