Interviews & Portraits Julia Moreno - 12. May 2021
Lina Lynn has a lot to say. So we asked her for an interview and the sexy fuzzy head gladly took the opportunity to give her fans and our readers a more private insight into her still young life, which she now spends in Cyprus.

Interviews & Portraits Julia Moreno - 13. April 2021
Mila Jane - dangerous eroticism? The bright blue eyes have a penetrating look. The cute face is framed by long black hair. According to her...

Interviews & Portraits Julia Moreno - 23. March 2021
The Berliner is single and says of herself that she loves sex and has been very experimental. But she has not yet discovered everything. Well, who wants to help? She's still looking. Introducing Hailey-B! 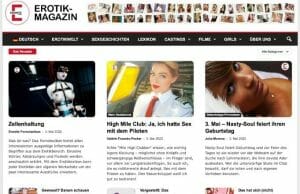